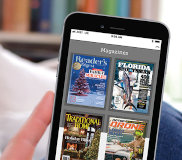 Borrow eBooks, audiobooks, and magazines on any major computer system or device.

Free access to the New York Times online is available to all Hillsborough County residents with a library card.

Digital newsstand with thousands of the world's most popular newspapers like the Tampa Bay Times.

The most searched magazines focusing on current events, sports, science and health issues.

The complete archive of National Geographic magazine along with a cross-searchable collection of books, maps, images, and videos.

A wide-ranging, general-interest periodical database with more than 8,000 titles, most in full text.

Current and archived newspaper articles from around the United States, organized by state.

Full and partial runs of regional, state, and local newspapers in the United States and other countries, dating from the early 1700s into the 2000s.

An archive of articles essential to the study of American history and African-American culture, history, politics, and the arts, spanning 1893 to 2005.

An archive of Tampa Tribune newspaper articles from 1990 to 2016.

An archive of newspapers from Florida and the Southeast from the 19th century forward.

A wide-ranging, general-interest periodical database with more than 8,000 titles, most in full text.