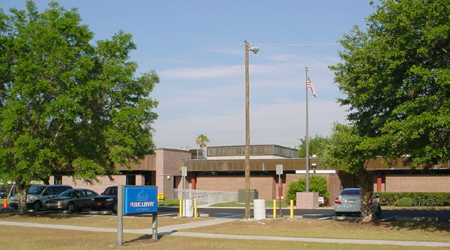 The Lutz Branch Library has the technology common to all locations and several meeting spaces.

The Lutz Branch Library is located in the heart of this northern Hillsborough County community at the corner of U.S. Highway 41 and Lutz-Lake Fern Road W. The 12,000 square foot branch includes a community room and two small meeting rooms.

Library service began in 1961 when the bookmobile started making a regular stop in Lutz. In the late 1960s, the library guild of the Lutz-Land O'Lakes Women's Club set up a temporary library of 1,000 volumes on home-made bookcases in a building on U.S. Highway 41. With a staff of volunteers the library was open 20 hours per week.

In April 1970, the Lutz Branch Library opened at its present location. To better meet the needs of the growing community construction of a 5,000 square foot expansion and a complete renovation to the original 7,000 square foot structure began on July 29, 2003. The project was completed on June 1, 2004. On March 9, 2007, the Reading Room was dedicated to Helen Swisshelm in recognition of her long and unwavering commitment to the Lutz Branch Library and the library system. She is the founder of the Friends of the Lutz Library and was its President from 2000 to 2007. Additionally, she served on the Tampa-Hillsborough County Library Board from 1990 to 2005 and as its Chair from 1992 to 1993.

The exterior of the library is enhanced by a hand carved brick mural, Lutz Locomotion, by artist Charles Sharrod Partin which celebrates the important role of trains in the growth and development of the Lutz community. The sculpture, funded by Hillsborough County’s Public Art Program, was dedicated on March 9, 2007.