The Town ‘N Country Regional Public Library is temporarily closed for renovations. We apologize for the inconvenience. The Maureen B. Gauzza Public Library is a nearby location that will be open during this time. 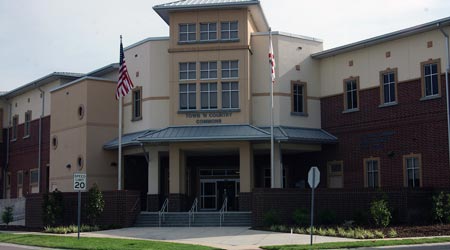 In addition to the technology common to all locations and a number of meeting spaces, the Town 'N Country Regional Library has:

The Town 'N Country Regional Public Library began operation in 1969 as the West Gate Branch Library in a storefront at the West Gate Shopping Center. The library moved to a new building on Paula Drive in the spring of 1975. The branch was a test site for the library system's first automated circulation system in 1986. West Gate Branch Library became a regional library in 1995. On March 15, 2007, after 32 years of operation, the Paula Drive location closed to make way for construction of the Town 'N Country Commons and the library reopened with a new name in 2008.

The Town 'N Country Regional Public Library has an active Friends group, who as staunch supporters and advocates of library programs and services, maintain the Bargain Street Bookstore. The bookstore offers great bargains on gently used books, and all proceeds benefit the library.

The Bargain Street Bookstore is currently closed for renovation.