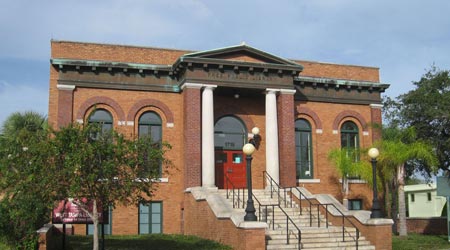 The West Tampa Branch Library has technology common to all locations and several meeting spaces.

The West Tampa Library is part of the West Tampa National Historic District and is a City of Tampa Historic Structure. It is a historic link between the establishment of the City of West Tampa, the Cigar industry, and the Latin and African-American communities. On May 18, 1895, West Tampa incorporated with a population of nearly 3,000 people and became one of Tampa's earliest suburban towns. West Tampa's heyday was from 1900 to about 1920 when cigar factories flourished; dozens of commercial structures were built in the town's commercial core, centered at the intersection of Main and Howard.

This branch receives support from the Ada T. Payne Friends of the Urban Libraries, active supporters and advocates for the library. Proceeds from their fundraising efforts directly benefit this branch and the Robert W. Saunders, Sr. Library. Bookstores run by the Friends are located in both locations.

As one of only ten public libraries in Florida funded by philanthropist Andrew Carnegie, the Carnegie Library on Howard Avenue was constructed in 1913 in Neo-Classical Revival architectural style. Land for the building was donated by Angel Cuesta, a prominent cigar factory owner. The City of Tampa annexed West Tampa in 1925, and today the original library building continues to serve as the West Tampa community library.

An additional 5,000 square feet were added to this historic building to make it accessible to everyone, allow for additional library materials and computers, and provide meeting room space for the public. The groundbreaking ceremony for the expansion of the West Tampa Library was held in September 2002 and construction was completed in September 2003. Refurbishment of the original building was completed in April 2004.

Several distinctive pieces enhance the interior of the West Tampa Branch Library and present a unique historical statement. Triptych oil on canvas paintings by artist Ferdie Pacheco (Coming to Work, The Cigar Factory, Main Intersection) are located in the main foyer. Kaleidoscope, 2003, an acrylic on canvas triptych by artist Synthia St. James is located in the main reading room, which includes stained glass windows of the same design.